The sun was up but a cool breeze made it all right. We were going to see a giant fossil, an ostrich farm and some ancient (Muisca) ruins. Boxhead had studied the map and D had spoken to the girl in the hostel. We knew where we were going. Soon we were on the edge of the centre of town and there was a sign telling us that the ruins were 6.5km away. Boxhead said the ruins were farthest away on the map. We didn’t think that so bad.
The first couple of hours went by without much incident. We walked with purpose. We followed the road, which had a little tilt in it but not so much that it was an effort, and we passed white houses with orange roofs. The houses were spaced far apart. Everything else was just desert land, hot and dusty.
We came across a sign that informed us the ostrich farm was 4km away.
“Look at that, only 4km!”
A kilometre later we came across another sign saying ‘Ostrich Farm 4km’
“YOU DIRTY MOTHERFUCKER!”
A local politician blew past us in his convoy of police bikes and land cruisers. We continued up the hill. Every so often there was a useless map which gave you an overall idea of the region but didn’t tell you where you were in it. Then we arrived at a clearing with a view. I decided to take a picture.
I promised myself that I would take more pictures on this trip, TENS OF THOUSANDS of them, but I am a lousy photographer, I am completely incapable of framing a picture, and I often think what’s the point? But not taking any pictures hardly helps either.

From the clearing we could see a sign for the giant fossil museum and we walked on down to it. Next to the sign for the fossil museum was an empty restaurant. There was a girl sat outside it, alone. There wasn’t anybody else around that I could see. The ostrich farm was 2km to the left, going in the opposite direction to the fossil.
“What shall we do first? Ostrich farm or giant fossil?”
We decided on the fossil. The fossil was relatively interesting. It had been some kind of kronosaurus. I didn’t think it was worth £2. After five minutes I had read all of the displays and seen all of the rocks. I found the visitor’s book most interesting, seeing where all the people had come from. The girl that had been sat outside the empty restaurant was also in there with us.

Boxhead and D wanted to buy some water. There was a shop at the bottom of the short road that led to the museum and I said that we should get something there.
There were no drinks, only paintings and artesian souvenirs.
“Sorry fellas…”
“It’s okay, there have been places offering beer every 300m so far…”
We decided that we wouldn’t go to the ostrich farm and instead go to the ruins, returning to town along a different road. Boxhead said to continue down the road we were on. We started walking and there was more sun, more nothingness, mundanity.
The girl from the restaurant was somehow ahead of us and after a while we saw her talking to a man pulled over in a pick up. We walked on past and when I looked around she was following us. I took this as a good sign. So we walked along and there was NOTHING, until A SIGN for a ‘1900’ theme park faded by the sun, and another even more faded behind it obscured by trees. We stopped and thought about it and carried on the way we were going. The girl was still behind us. I took this as a good sign. 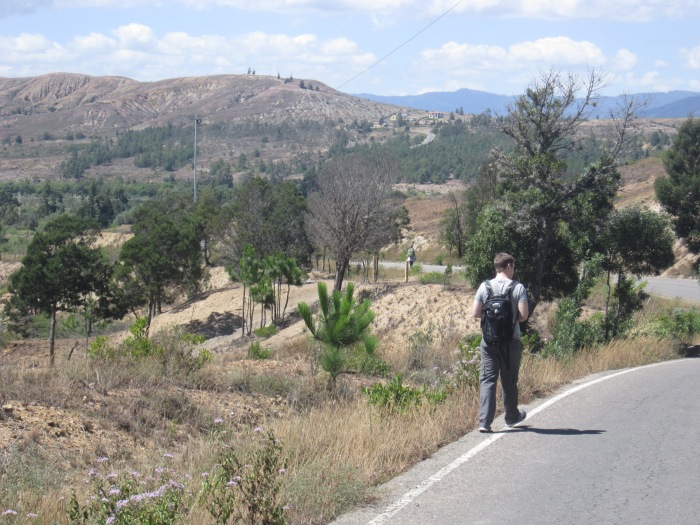 After some km I began to get worried. It was getting very hot now and the only water we had was the little I had in my bag which I didn’t much want to share. We stopped every km or so checking our position by GPS on D’s phone. We’ve come too far, I thought.
“We’ve come too far” I said, “Missed a turning”
“Hmmmmm I think so too…”
“ARGHHH WHERE THE FUCK ARE WE???”
The girl caught up to us. “Are you going to ze Infiernito?”
We all looked at her blankly. I told her we didn’t know where we were going.
A bike was coming then and she stood in the road and it pulled over. The bike drove off and she walked back over to us. “She said eet is 15 minutes further”
We’d been warned in Bogota to never trust a Colombian’s directions. They will never simply tell you that they don’t know. They’d rather send you to an easy death in the hills outside of Villa de Leyva.
The girl marched on. We all agreed it didn’t sound right. The sign back in town had said only 6.5km. We figured we should have taken the turning with the theme park sign. We started back the way we’d come.
I walked, scarcely aware. There was only despairing silence between us. We just wanted to get back. We made it to the turning and started up the track. The sun beat down mercilessly on us. There was no shade. My neck was sunburned and I had to wear a scarf around it. I couldn’t help feel partly responsible for the thirst we were all feeling. But we weren’t quite going insane yet.
Then we came upon the Infiernito. We looked at it through the fence. It was a small field filled with what looked like large stone penises pointing up to the sky. Some tourists walked among the penises.
“We should have gone to the ostrich farm”
“Yes…”
We didn’t go in but D approached the guard to ask if there was any water we could buy. There wasn’t.
He told us there was further on. We walked past more houses, solitary and quiet. I thought at least we’re not going to die out here, we could always ask for a glass of water.
“AND WHERE’S THAT FUCKING THEME PARK!?” I hollered
Then there was music coming from somewhere, loud movie music. It was the theme park. There was nobody at the gate, nobody anywhere. Next to the park were some long white tents in which tomatoes were growing. D and I walked through the gate. The park was small, like the Wild West bit within a larger park.
Inside we found two old ladies sat on a bench. D asked if they had any water. They told us to go back out and wait at the gate. We did. The place was creepy. It was the music that got me. Here it was booming out across the desert yet there was nobody around to hear it.
The two ladies came out with some water and D paid them. We drank it straight down.
After that there’s not much to tell. We made it back to town, though from the park it was still a lengthy walk. We talked about having a cold beer on the main plaza when we got back, and we did, but not straight away and not on the plaza, and I watched the stray dogs, young and healthy, many of them, but where are all the old dogs?
I decided that I like it here very much.